Please Read: LPPstory/Liria is © copyright 2003 to me, Jennifer McCutcheon. Do not, I repeat, do not steal it, copy it, or in any other way use it for your own gain. This is my work that I've spent long hours over, and plaigarism of any sort will not be tolerated. Thank you. 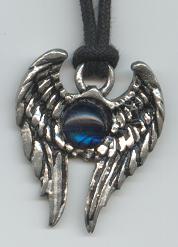 Blurb: The organisation represented by a white badge hunts down those it considers different, or special. These are people with power, the ability to do more than the average person, the ability to do things they cannot. Some of these are Marked families, clans of people who share the same ability or talent, Marked with a symbol on their foreheads, only visible when they wish. In the distant past, one of the Isolde forsaw the future. And he passed this prophecy onto the Brion, for he recognised their Mark in his vision. And the Brion and the Isolde passed this prophecy down the generations, waiting until the time would come when it was realised. Flash forward, to the present, to a girl. She only wishes to live her life free of persecution. But she stands at the centre of the prophecy, and the white badges pursue her every move...

Disclaimer: This story is fictional. Really. Any similarity to persons living or dead is coincidental. And I do mean it. It's set at UWA because do you really think I'm going to make up a whole new campus? I know the layout of this one. *grins* So nyah. Also, I have screwed with the placement of things, such as stands of trees, etc. Deal with it. ^_^

Dedication: Dedicated to Troy, because of Evitch. We love you, Troy. Even though you're a bitch. :P

The necklace this story is based on